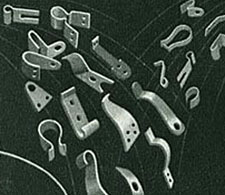 Print | PDF
Amodern 1: The Future of the Scholarly Journal
February 2013

Books, monographs, scholarly articles published in peer-reviewed publications. These are the coin of the academic realm. Museum catalogues, essays commissioned for purposes that are not purely scholarly, and work done in a crossover venue that has trade or commercial or popular associated with its identity are considered lesser contributions, and weighted accordingly in moments of tenure or promotion. But as the industry of blogs and tweets has blossomed, the question of how new formats and genres will be accounted for within the metrics of scholarly communities, and how the processing tools that generate citation indices and frequencies can be extended to assist in the mechanics of ranking a scholar’s achievement without forcing a committee into any direct encounter with their work. Cynicism aside, the possibilities are rapidly becoming probabilities with every sign that we will soon be tracking the memes and tropes of individual authors through some combination of attribute tags, link-back trails, and other identifiers that let can generate quantitative data and map a scholar’s active life.What might this process look like and how will it change scholarship? To what extent are we seeing a transformation of the scholarly apparatus and the terms of valuation and assessment for the morphed and mutated extension of commentary and debate that used to vanish in a trail of question and answer periods, obscure reviews, private rants, vendettas, or exultations? Will we need a ranking for quibbles over queries, for corrections as of great value than challenges to argument? Or vice versa? In this brave world of scholarly novelty, will data mining triumph over wit and substance? Or can we find ways to identify and reward the elegant turns of intellectual phrase that display the gleaned insights of a disciplined mind?

Traditional scholarship chunked into familiar units (book, chapter, article, book review, note), with length and depth, figuratively speaking, aligned to norms and expectations that varied somewhat by field, particularly with respect to conventions of authorship (individual, collaborative, team-based), then current scholarship’s foray into links, blog entries, tweets, and wikis is just the tip of an emerging iceberg. Within a few years, the micro unit will prevail, I suggest, in accord with new modes of attention (deficit) for both production and reception. Long forms will exist, but next to them will be the accretion formats – compilations of this and that stuck like authored minnows in a vita gill net. The accumulated worth of all this small stuff will not be measured by the number of single entries (current metrics for collegiate rankings are in fact in part created by just such techniques in our day), but by a more complicated formula in which a posting, responses generated, by whom, number of links and citations, and position within a semantic mapping of hierarchies themselves generated by prestige factors (institutional affiliation and reputation of sites and persons). In addition, I suggest, we will use text processing protocols to get a sense of whether or not responses to a post were “positive” or “negative” – e.g. substantive or dismissive — of the author’s contribution.

The assessment machines will crank along, and as in any other online game, the tickers will click happily as they rack up the perceptible score. We may be well on the way to a Gattica-type situation: a student entering a grad program can have his or her potential assessed in advance, their probability index generated, and their place in the academic pantheon mapped by the arc already predicted by all these many factors. Of course, outstanding performance will always break the normative curves, and those who toil in obscurity for years have yet the chance of a stellar moment on the stage, just as those who plateau can expect their salaries to be similarly flatlined. In such an era, the wizards of academe will convene their virtual selves as well as their analogue embodiments and the game of humanities scholarship will shift from its current condition of massive multiplayer offline game to one that is actually digitally enabled.

But the notion of the author attribute raises some other interesting possibilities, for the task of writing might come to be attached to the act of creating metadata as well as prose discourse, or to shaping a content model, a schema in XML, or a database structure. These are formats just beyond the pale of the academic purview. We can more easily imagine a tweet-assessor counting up entries in some bizarre balance sheet than we can the mavens of a home department calculating the efficacy of a mark-up scheme. The concept of progressive bibliography, or extensible cataloguing, in which authored contributions assist readers in the location and use of materials, is based on a platform that would enable successive entries over time. Such an approach recognized the shifting nature of an object under inquiry – no book is just a static object, its identity changes through the faceted perspectives of readers and uses, new interpretations, whether these are grounded in new bits of knowledge about the work or a rethinking of its arguments within a long history or a new frame.

Similarly, the commentary engines that will accrete discussion and debate around kernel texts with the persistent memory of barnacles will allow us to think about the shape of arguments developed over time and of individual points and nodes within these. The first objection to a sullied argument, the initiating quarrel with a received position, might spawn a whole flock of responses that would themselves spread, sprout, and give rise to eddies of productive discourse. The argument mapping necessary to track such storms of inquiry and intellectual fervor will have to be as sophisticated as weather satellites in detecting the forming cyclones and anticyclones that generate violent downdrafts. But even when we can watch these intellectual formations rise and fall, form and disperse, we won’t want to separate the formal machinations of this activity from the substantive content of argument. If we can track activity with metric accuracy, the errant motions of a person zig-zagging across a discourse field, we face more challenges trying to automate assessment of the argument made at the level of specifics. A mass of activity might indicate banality as well as significance.

As accretion engines begin to support elaborate scaffolding of argument, the search and sort filters necessary to follow a line of discussion, or a single author’s argument or knowledge, will also have to sophisticate. The current generation of topic maps and network analysis tools has a very abstract, schematic graphic language in which the parameters that generate the visual artifact are not necessarily transparent or legible. For instance, what does proximity mean, or size, or scale relations in a particular graph? They are often merely artifacts of the visualization program, not expressions of specific semantic value. But we know visualization tools are essential ways of compressing, rendering, and making navigable a large corpus of information or material. We can imagine a kind of author-detection-luminous dye injected into a network to light up the track of an individual’s intellectual life. Insidious? Invasive? Analytic? All of these, and more, but do-able and probably useful for all kinds of analysis and research, not just the assessment of scholarly authorial achievement.

Imagine a Talmudic environment, its web of commentary extended to a macro-scale across generations of dialogue. What method of organizing this field of materials would help understand the way any individual author’s interpretations shifted or changed understanding of the texts, or re-set the fundamental questions to be asked? How, to use a repulsive term, do we identify the “game-changers” in such a field? Scale will escalate rapidly to an unmanageable level, so that any and all ways of filtering will be an essential feature of the digital scholarly apparatus. The configurations by which we organized our reading will shift too. Our understanding of the diagrammatic character of thought – its relational organization and semantics of spatialized expressions of thinking and writing – will change exponentially. Screen space, already made porous by the swipe and touch screens, will be a environment that can be manipulated tactilely in which axes of organization will follow multiple trails of association or ordering (thematic, chronological, influential, social, historical, political, economic etc.). Our knowledge of relations, a science invoked by Charles Sanders Peirce and yet to be realized as a method, will be intuited through graphical moves and gestures that spatialize our thinking processes through structures that array, hierarchize, lineate, evolve, graph, and otherwise express a semantics of relational moves in the intellectual game of interpretation and knowledge production.

Reading will be immersive, not in the sense that we think of now, where the seamless virtual skin of a rendered environment creates an illusion of wholeness where only fragmentary knowledge exists, but the opposite, a faceted fragmented world of associated bits, pieces, parts, whose kaleidoscopic reorganization follows a productive tension between lines of composition and interpretation, authorship and re-authorship through the performative acts of reading and viewing. Scholarship in such a world, one in which an economy of excess has long displaced one of scarcity, will be an act akin to that of providing an expert commentary on the experience of walking through the Grand Canyon, the ruins of Pompeii, or an unfamiliar cultural environment. The repurposing protocols will suck relevant bits from these experienced commentaries or imaginative flights of interpretative fantasy, and offer them like motes of insight in the distributed environment of augmented reality. Will authors receive some micro credit for the use of their labors? Like the system that Canadian libraries use to return some remuneration to authors at year’s end that accords with the number of times their works have been checked out? What a thought.

In any case, what lies ahead is a new system of micro-contributions in the macro-scale of an extensible universe of discourse, networked, and able to be processed, searched, and assessed in ways that will augment the human peer review system while also, hopefully, making expertise available and accessible to a broader audience. Specialized research, esoteric and meant for a small part of sometimes very small fields, will go on – also recognized by a kind of isotope of influence meter – but rewards for more popular contributions to knowledge and culture should increase if we can only rid them of the stigma of being degraded for being accessible. The walls of academe might open to more fluid and easy dialogue with the public sphere, and amateur scholarship, developed from love of knowledge and pursuit of specialized expertise, might be recognized on terms more similar to that of the academic world. In a utopian vision, a participatory scholarly environment might support multi-tiered work, just as games support engagement at different levels, with players earning their right of entry through contributions to the field.

In summary, the largest changes, I suggest, will be to come to terms with new formats and genres, create a peer review mechanism for authored work at different scales and within novel parameters, and to monitor the right relation between automated metrics and processes of assessment and those that will continue to recognize the value of individual and insightful scholarship on its own, substantive, terms. Accretion, iteration, annotation, and migration of content into new formats and structures of argument are ahead. Rhetoric will extend its traditional purview, assisted by new techniques of visualization and diagrammatic thought. And the terms of scholarly work will expand to include more varied and innovative contributions used by a more diverse and participatory audience. At least, we can hope for this.