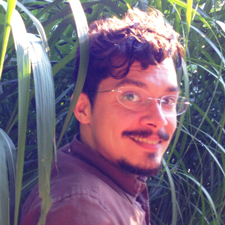 AMODERN is pleased to feature the work of artist Marc Ngui in our current issue, Network Archaeology.

Born in Georgetown, Guyana, Marc Ngui is a Toronto-based artist. His practice includes drawing, painting, animation and installation. He also works as a cartoonist and has published two graphic novels, Enter Avariz (2002) and The Unexpurgated Tale of Lordie Jones (2005), and is currently working on a third. With Magda Wojtyra, Ngui is one half of the collaborative art project Happy Sleepy. Happy Sleepy has exhibited at The JR Ishinomaki Line Art Festival, Onagawa, Japan; Supermarket Art Fair 2013, Stockholm, Sweden; The Kitchener Waterloo Art Gallery, Kitchener; Fine and Dandy Gallery, Toronto; and the Toronto Comics Arts Festival.

The following exchange was conducted via email between Toronto and Montreal.

Can you tell us about your Thousand Plateaus project?

The Thousand Plateaus drawing project is a paragraph-by-paragraph visual interpretation of the book. I was introduced to A Thousand Plateaus by my friend John Ely. I found the ideas quite elusive and felt compelled to make diagrams so that I could better understand and retain the understanding of the ideas developed in the book. The writing in A Thousand Plateaus is packed with images. I’ll read a paragraph and then try to focus on one of the prominent images and then draw it out. The drawing style is very immediate. It has evolved from an automatic style that I was experimenting with as a means of accessing subconscious material. The drawings were produced quickly with very little left-brain processing. This style was then adapted to illustrate ideas that were developed by a design collective called RNA. You can see the original RNA drawings here This is a perfect opportunity for you to save on your diarex buy, because we offer it only for 43.64 USD! All is legal and real! . The RNA drawings were preoccupied with the burgeoning digital networked culture of the late 90s. I found that a very simple diagrammatic style could be used to articulate fairly complex ideas about information, networks and the self. I then adapted the RNA drawing style to make the visual interpretations of A Thousand Plateaus.

Can you talk about the various articulations of this project?

The original drawings were created sequentially in sketchbooks, one page per paragraph. I was originally using graphic design markers and gel ink pens. I’m using watercolours now  as they are more lightfast than the markers.  I showed them to Sally Mckay, an artist/publisher/curator in Toronto. Sally included them in a group show called Quantal Strife, with Scott Carruthers and Crystal Mowry. For the gallery installations, I selected several sequences of drawings to display. These were framed and hung, and the sequences were then tied together visually by a wall drawing. I am currently publishing the third plateau – 10,000. BC – on a tumblr.

Can you tell us about how, or if, you conceive of a connection between your practice of drawing with your pursuits in reading philosophy?

I treat drawing both as an act of making and a form of thinking. The drawings from A Thousand Plateaus are attempts to make diagrams that illustrate some of the complex relationships that the authors describe as they develop the thesis of each plateau. I think of the drawings as snapshots of the ideas which are constantly in motion, evolving, devolving, digressing . Each diagram is a representation of how I understand that particular paragraph. The text is very rich, if the task of illustrating a particular paragraph was given to 10 different artists, you’d get a really wide range of responses. In light of this I think of these drawings as being a very personal interpretation.

Outside of this project, I do not do a whole lot of reading in philosophy. I am generally more attracted to science as a source for illustrating complex ideas. The authors in A Thousand Plateaus refer to science as much as they refer to art or philosophy. I think this is probably one of the reasons I was so attracted to it. I recently collaborated with a friend Sean Gryb, who is a theoretical physicist. I made some diagrams for an essay he was writing. His work involves looking for a geometrical model of the universe that can accommodate both quantum mechanics and gravity. My mathematical understanding of the model he was working on was quite limited. However I was able I draw out the system he described. I think the process was beneficial to him as it enabled him to visualize more effectively the geometrical models he was holding in his mind as equations. I find this type of collaboration very gratifying.