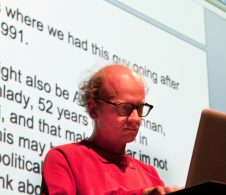 On July 23, 2016 in a reading in Rhinebeck, New York, I presented a simple and thoroughly unoriginal sentence generator. The text that was the basis for this project was taken from a children’s book; I did not write or even participate in the selection of this text. That selection was done by an early researcher in machine translation, who wrote a program to generate random sentences, as part of his research, based on this text.

This researcher explained the context for his sentence-generating project:

In the paper “A Framework for Syntactic Translation,” it was proposed that a translation routine could be divided into six logically separate parts. There was a horizontal division into three steps: sentence analysis, transfer of structure, and sentence synthesis; and there was a vertical division into the operational parts, or routines proper, and the parts that contained all the necessary knowledge of the structures of the languages involved and their interrelation. It was hoped that to divide is to conquer.1

Although my program does not function in exactly the same way, it implements the essential generative process, based on a formal grammar. My work would be best understood as porting (analogous to translation, but done across computational platforms rather than human languages) or reimplementation (related to the reconstruction of texts through editorial work). Separately, I have been working at the porting and reimplementation of computational literary works in other languages, which we have been translating to English in the Renderings project; also, I have started a literary translation project, Heftings, to facilitate collaboration and multiple attempts at translating particularly intractable work.2 What I have written here, however, traces a different engagement with translation, and machine translation specifically, following some of the threads that tangle into my “Random Sentences,” a 200-line program in Commodore 64 BASIC.

The 1961 paper cited above details how a researcher at MIT, using his string processing language, COMIT, on the IBM 704, implemented a simple grammar for generating sentences at random. This researcher, Victor H. Yngve, was demonstrating that one part of a presumed machine translation pipeline could be made to work: from an abstract representation, sentences (specifically, English ones) could be generated. “In the work reported here we are concerned with just two of the six parts of a translation routine – the sentence-synthesis routine and the grammar, which is eventually to contain as complete a set of rules for English sentence structure as possible.”3 What remained, then, according to this idea, was to convert sentences in another language into this sort of abstract representation and to transfer the structure.

The paper Yngve wrote included not only output but also, unusually, the complete code of the program he wrote, as originally punched out on cards. (A low-resolution scan of Yngve’s original paper can be found online; Christine Mitchell, co-editor of Amodern 8, has provided much higher-quality scans of the page spreads containing the original grammar and the sample output: Pages 72-73, pages 74-75, pages 76-77, pages 78-79.) Yngve took a step that was unusual, if not completely unprecedented: he defined a distribution of sentences, presenting samples from that distribution. A decade earlier, Christopher Strachey had done something similar, using his distribution to characterize how love letters are written,4 but not basing his work on a specific existing text, as Yngve did. This distributional approach was a powerful perspective, connecting to a prominent project by artist Agnieszka Kurant, in which she invited museum visitors to sign their name, treated the results as a distribution of signatures, and, from that, found the mean or average signature, which was then represented on the side of the Guggenheim Museum and in a gallery piece.

Agnieszka Kurant commissioned me to write a poem for an opening of hers, for an exhibit that included her piece “The End of Signature.” What I wrote was “Random Sentences.” The distribution of sentences generated in this way is discrete and multi-modal; that is, there are many sentences that are most probable. An average (the modes would be most suitable in this case) would not characterize this distribution very well; numerous samples from the distribution do help to characterize it, however. Yngve presented many samples in his paper, as I did when I shared the output of my version of his program.

In 1966 a short article by Margaret Masterman appeared in an avant-garde collection, Astronauts of Inner-Space, alongside articles by Marshall McLuhan, William Burroughs, Alan Ginsberg, Dieter Rot, Raoul Hausmann, and others. In this article, Masterman quoted the output of Yngve’s system and celebrated it, stating: “The question of whether such sentences as these are or are not nonsense is extremely sophisticated.”5 She also wrote, of Yngve’s system, “By reading … what it produces we can at last study the complexity of poetic pattern, which intuitively we feel to exist, if only we were able to grasp it.”6 Masterman, a remarkable figure, was a student of Ludwig Wittgenstein’s, but in this article, instead of treating the work linguistically or philosophically, she brought Yngve’s sentences into the context of poetry – and it was through her article that I first encountered his work.

Yngve’s grammar is based on the first ten sentences of Lois Lenski’s book The Little Train, first published in 1940. The book, like others in the series, (Lenski wrote several dozen featuring the same main character, Mr. Small) is remarkably detailed, this one providing an account of the operation of a steam train. The first ten sentences of this book, which are quoted in Yngve’s paper, are:

Engineer Small has a little train. The engine is black and shiny. He keeps it oiled and polished. Engineer Small is proud of his little engine. The engine has a bell and a whistle. It has a sand-dome. It has a headlight and a smokestack. It has four big driving wheels. It has a firebox under its boiler. When the water in the boiler is heated, it makes steam.7

The edition Yngve consulted had a hyphen in “sand-dome,” but for some reason this hyphen is absent in the colorized edition of the book that I have, from 2000. I referred to this more recent edition in my project, and omitted the hyphen.

Also, rather than use the exact grammar that Yngve devised within COMIT, which includes complex substitutions of numerical and logical subscripts, I developed one based on the work of one of his colleagues at MIT, Noam Chomsky. Specifically, I developed a context-free grammar8 and wrote this out initially in Backus-Naur Form.9 This representation is not used directly by the final Commodore 64 program, but is presented in comments to explain the workings of the Commodore 64 BASIC code. I also developed JavaScript and Python programs10 that directly read the grammar, which people might choose to modify; they could then use their own programs to generate different sentences. This is one of a few good ways to explore creative language generation using grammars; the Tracery11 system offers another. Yngve defined 77 rules, and did not handle generating the correct indefinite article (“a” or “an”) or the correct plural form for “firebox.” My grammar – thanks to Chomsky’s formalism – has only 27 rules, correctly realizes the indefinite article, and correctly pluralizes all nouns.

The computer system I used for the main part of the project was the Commodore 64, released in 1982. It was extremely popular and affordable, and remains the best-selling single model of computer. The founder of Commodore International, the company that produced this computer, was Jack Tramiel. He was born in 1939 in Łódź, Poland, forced into the Jewish Ghetto there, worked in a garment factory, and, upon the liquidation of the ghettos, was sent to Auschwitz where he and his father worked as slave labourers; his father was killed. After the war Tramiel arrived in New York City with ten dollars and some skills he had acquired repairing typewriters. His company initially did typewriter repair, moved to selling calculators, and then began developing and selling home computers. Tramiel said he made computers, including the Commodore 64, “for the masses, not the classes,” but he was also known as one of the most ruthless businessman, saying “Business is war.”

Microsoft BASIC version 2 for the Commodore 64, which I used to implement this grammar, was adapted from Microsoft’s 6502 BASIC by Ric Weiland, one of Microsoft’s first employees, hired in the company’s first year. While researchers advocated structured programming and programming languages that connected to progressive educational philosophies, such as Logo and Smalltalk, the true lingua franca of the early microcomputer era was BASIC, and while Microsoft was not the only maker of microcomputer BASICs, Weiland and his colleagues were the most significant force in bringing accessible programming to the people during this crucial time. Weiland left Microsoft in 1988 and devoted himself to philanthropy. When, suffering from depression, he killed himself in 2008, he left $65 million to gay rights and HIV/AIDS organizations, the largest bequest ever made to these causes.12

Almost all of the people I have mentioned so far are dead. There are living people behind this project, too, such as Chuck Peddle, main designer of the Commodore 64. There’s also the person who created the original 6502 version of BASIC that Ric Weiland adapted: Bill Gates. The BASIC programming language itself, though it was brought to the microcomputer by Microsoft, did not originate with that company. Rather, it was created in the mid-1960s by two mathematicians at Dartmouth College, John Kemeney (who is deceased) and Thomas Kurtz (who is still with us), along with their undergraduate collaborators. All of the following people, among still many others, are therefore unwitting collaborators of mine: Victor H. Yngve, Margaret Masterman, Lois Lenski, Jack Tramiel, Ric Weiland, Chuck Peddle, Bill Gates, John Kemeney, Thomas Kurtz, and Agnieszka Kurant.

Yngve’s fascinating computational poem is one of many that was not created as a poem and was not created by a poet. It originated to be one component in translation – not literary translation, but business, technical, and industrial translation, machined into a computational pipeline that included sampling from a distribution and outputting generated language. Nevertheless, Yngve’s process generated poetic language and sensibility alongside English sentences:

It is also interesting that some of the original vocabulary words seem to change meaning drastically when they are embedded in different, though similar contexts. We thus appear to have in this type of program a fruitful method of examining the relation of the meaning of words to their context, one of the central problems in mechanical translation.13

Yngve never developed an efficient, useful machine translation system to accomplish these communicative goals. But he succeeded, even if accidentally, at firing a poetic probe into language, flexing syntax and running through a small vocabulary to create unusual expressions. Although these sentences were not original when I re-made them in 2016 – something I did in part as a way to trace these histories – they must have been original in 1961. We can still wonder what certain of these generated sentences mean, if indeed they mean, and how they mean, recalling what Margaret Masterman wrote: “The question of whether such sentences as these are or are not nonsense is extremely sophisticated.”