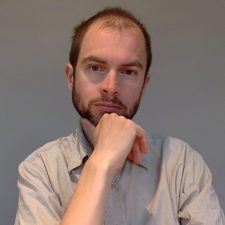 Otso Huopaniemi is a Finnish-born, Berlin-based performance-maker, artistic researcher, and university teacher. His performance works and writings deal with the relationship of writing, bodies, and technology. In particular, Huopaniemi is interested in the potential of digital media to create extensions and new spaces for performative writing. Huopaniemi’s work has been presented in New York, Berlin, and Helsinki, among other places. In 2018, Huopaniemi will defend his doctoral thesis Algorithmic Adaptations at the University of Arts Helsinki, Theater Academy.

Articles on Amodern by Otso Huopaniemi

LOVE.ABZ AND THE TASK OF THE MACHINE TRANSLATOR

An Interview with Otso Huopaniemi

love.abz (2011-2015) was a series of performances that began when Finnish playwright and performance scholar Otso Huopaniemi ran his play, An ABZ of Love, through Google Translate, repeatedly translating from Finnish to English in a recursive loop. This poetic experiment in machine translation then evolved into a Babelian performance work that used live acting and live machine translation to explore the fragility of language and our ongoing relationship with machines, as well as questions of textual stability, semiosis, and authorship. love.abz was performed in New York, Berlin, Cardiff, Karlsruhe, and Helsinki, with several different casts and using a variety of languages. In this extended dialogue, Huopaniemi and Rita Raley together consider "the task of the machine translator."